The Watchman and the Hunter - Part 2

While wondering what the difference is between a heresy hunter and a watchman on the wall, I decided to find examples of hunters and watchmen in the Bible. (I use blueletterbible.org to search and study, with KJV, ESV or NASB versions).

Bible Examples of a Hunter:

I'm guessing that hunting became the thing to do shortly after the flood, when animals turned wild as God put the fear and dread of man in every beast of the earth, and gave every moving thing for meat (Genesis 9). There are only a few verses here and there about hunting, like “the slothful man (who) roasteth not that which he took in hunting” (Pro 12:27), and a parent’s counsel to a son to deliver himself from “the hand of the hunter, and as a bird from the hand of the fowler” (Proverbs 6:5). As for hunters, I could only find the names of two in the Bible.

Nimrod, great grandson of Noah, was the very first hunter mentioned in the Bible, and we all know what he turned out to be. His name means ‘rebel’, and that is what he was. Nimrod built the tower of Babel and eventually founded Babylon, later used by God to judge his rebellious people, the spirit of which still lives on.

And the boys grew: and Esau was a cunning hunter, a man of the field; and Jacob was a plain man, dwelling in tents. And Isaac loved Esau, because he did eat of his venison Gen 25:27-28

Esau’s hunting and savory venison got him into a stew. It’s why he lost his birthright.

To simplify, according to the above verses, a hunter could be mighty or cunning. His hand was also something to be delivered from. The lazy hunter ate his steak raw. Even a mighty hunter before God can rebel against Him. One can become so focused on the hunt that one misses out on a blessing.

Bible Examples of a Watchman:

There are a few more watchmen mentioned in the Bible than hunters.

In 2 Samuel 18 we see that a watchman went on to the wall, looked, saw, cried, told the King, and told the porter. The watchman in 2 Kings 9 stood on the tower, spied, looked, saw, told. Psalm 127:1 says that except the LORD keep the city, the watchman waketh but in vain.

We read in Isaiah 21:6 “the Lord said unto me, Go, set a watchman, let him declare what he seeth... and he hearkened diligently with much heed And he cried, A lion: My lord, I stand continually upon the watchtower in the daytime, and I am set in my ward whole nights”. In verse 9 the watchman learned that Babylon had fallen, which will happen again when the world system (Babylon) falls again (Revelation 18:9-19).

Then there was Ezekiel, who God told to be a watchman (Ezekiel 3: 15-21) when he was with the captives by the river of Chebar. “Son of man, I have made thee a watchman unto the house of Israel: therefore hear the word at my mouth, and give them warning from me.” After hearing the extreme guidelines for the job, Ezekiel fell on his face, and God instructed him to have a self imposed house arrest lock-down, and to speak only when God told him to speak, with more extreme guidelines about what to warn and whose blood was required (Ez 33:6).

The next, and last, watchman mentioned in the Bible seems to have turned bad. "The watchman of Ephraim was with my God: but the prophet is a snare of a fowler in all his ways, and hatred in the house of his God." (Hosea 9:8) The days of punishment and recompense had come, as they had deeply corrupted themselves.


"The watchman of Ephraim was with my God; he had been formerly. They had a set of worthy good ministers, that kept close to God and maintained communion with him; but now they have a race of corrupt, malignant, persecuting prophets, that are the ring-leaders of all mischief.' Or, "The watchman of Ephraim now pretends to have been with my God, and prefaces his lies with, Thus saith the Lord; but he is a snare of a fowler in all his ways, and is cunning to draw the simple into sin and the upright into trouble; and he is so full of hatred and enmity to goodness and good men that he has become hatred itself in the house of his God, or against the house of his God.' Note, Wicked prophets are the worst of men; their sins against God are most heinous, and their plots against religion most dangerous. They may boast that they are watchmen, speculators, and, as far as speculation goes, they may be right, and with my God, may have their heads full of good notions; but look into their lives, and they are the snare of a fowler in all their ways, catching for themselves and making a prey of others; look into their hearts, and they are hatred in the house of my God, very malicious and spiteful against good ministers and good people. Woe unto thee, O land! unto thee, O church! that hast such watchmen, such prophets, that are seers, but not doers! Corruptio optimi est pessima-The best things, when corrupted, become the worst."

That's quite an elaboration. To simplify, according the Bible verses I found on the watchman, his job was to look and see and tell the King and the gatekeeper. He diligently declared what he saw, hyper alert, standing in his tower watching and waking both day and night. It was all useless if the city was not built by God, who appoints watchmen to learn very important things, and give stern warnings to the people. With this great and serious calling came great responsibility and accountability to God. It was apparently possible for a watchman to turn wicked and become the snare of the fowler. In other words, a watchman could become corrupted and turn into a hunter.

To conclude Part 2, those are the examples I found in the Bible of the hunter and the watchman. In Part 1, I had incorrectly concluded that there were three things in the picture I was pondering - a watchman, a true hunter, and a ‘lazy’ hunter. Now I’ve learned that there are good watchmen and bad watchmen as well. This adds a fourth dimension to the picture and the parallels. Like any worthwhile sorting project, things always look more complicated before they get organized. I need to think about these things and seek wisdom before I can even begin to answer my first question. 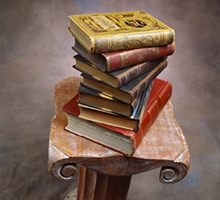 “… of making many books there is no end; and much study is a weariness of the flesh. Let us hear the conclusion of the whole matter: Fear God, and keep his commandments: for this is the whole duty of man. For God shall bring every work into judgment, with every secret thing, whether it be good, or whether it be evil.” Ecclesiastes 12:12-14

The Book Above All Books...

What does it mean to be a 'born again' Christian?

The Unreached and Persecuted

Watchers on the Wall - Discernment

Psychology in the Church

Blogs and Things to Visit

Books and Things You May Not Find in the Local Christian Book Store...

Things About This Blog

The little brown blog was born in 2007 as deception crept into Christianity in a blizzard of books and things.

*Disclaimer #1: Unless otherwise stated, the views expressed on this blog are the personal opinions, rantings, and meanderings of this blogger.

Disclaimer #2: Use biblical discernment with all other links in my sidebar and posts.

"Now these were more noble-minded than those in Thessalonica, for they received the word with great eagerness, examining the Scriptures daily to see whether these things were so." Acts 17:11